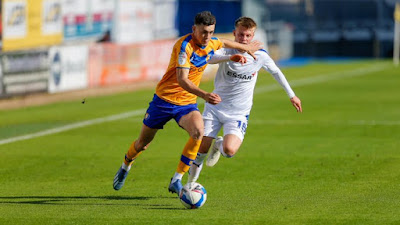 An encouraging opening day display saw Graham Coughlan's new look Mansfield side record a goalless drawn in a dominant yet frustrating performance against Tranmere Rovers. The summer overhaul was evident following the announcement of the starting 11, with only 2 of those who started the final game of the 19/20 season at Northampton taking to the Field Mill turf (Ryan Sweeney & Harry Charsley).

The Stags registered 19 shots on goal, the joint highest total in League Two, but were unable to notch the all important winning goal. Despite their 19 shots, the closest the home side came to scoring was when opposition left back Liam Ridehalgh turned the ball against the underside of his own bar from a Mal Benning free-kick. Mansfield limited a negative Rovers side to 5 attempts on goal, the joint least of any side in the division. Tranmere's lack of ambition was clear to see when they introduced a third central defender with a third of the game still to play.

The main beneficiary of the numerous chances created by Mansfield was striker Andy Cook, who was responsible for 6 efforts on goal. Cook declared war on a raft of familiar faces, having spent the latter part of last season on loan with Rovers, as well as having a previous spell on Merseyside between 2016 and 2018. The target man was allowed to leave temporarily over concerns about his ability to spearhead a high pressing side, however there was little sign of that perceived immobility on Saturday afternoon. Cook was a constant thorn in the side of one of the leagues most physical defenders in Manny Monthe, manhandling him off the ball before putting strike partner Jordan Bowery through on goal, an opening which Bowery really should have taken advantage of. Graham Coughlan revealed post-match that Cook shed between 10lbs and 10kg in weight over the summer. The clearest of his 6 chances was a back post header, the big man failing to time his jump correctly under pressure from Peter Clarke. He also created a chance for himself following a clearance from a corner, pulling the ball out of the sky with his right foot, before swivelling and hitting a shot with his left which was deflected wide for another corner. For a player whose future was in question during pre-season, Cook led the line tenaciously.

A key feature of Coughlan's approach to this game was instructing his team to deliver the ball in to the area when the chance arose. Mansfield attempted the most crosses of any team in League Two (37), the majority of those coming through wing backs Corey O'Keefe (14) and Mal Benning (11). However, it was a terrific cross from George Maris which led to a good chance for Jordan Bowery straight after the restart. The ball was set back to Maris by captain Ollie Clarke around 35 yards from the goal on the right. The midfielder produced a swinging cross which found Bowery unmarked on the penalty spot. Unfortunately, Bowery had got himself ahead of the ball, and could only adjust to head the ball a few yards wide of the keepers left hand post. The Stags crossed a little too hastily at times, rejecting the opportunity to work a way incisively into the area. That said, the wing backs were often isolated on the ball by their teammates. There is more work to be done on combination play between those wide men and central midfielders, which will hopefully develop as the team continue to knit together. When left isolated, O'Keeffe was able to utilise his excellent dribbling ability to forge a way forward, but on the other flank Benning was reluctant to run with the ball, either choosing to cross from deep or play backwards. The average position graphic below from whoscored.com shows the narrow positions occupied by Maris (#10) and Clarke (#8). It's also worth noting Harry Charsley's (#7) position, a willing runner beyond the two strikers, but again operating very centrally.

The undoubted man of the match was Corey O'Keeffe. The Irishman continued an impressive start to his Mansfield career with an exciting performance from right wing back. As mentioned earlier, he racked up 14 crosses, and ranked highest for the Stags in key passes (2), touches (83), dribbles (4), and tackles (2). The number of touches is particularly impressive for a wide man, accumulating 21 more than any other Stags player. Many fans were ruing the decision to release Hayden White in the summer, but whilst lacking White's pace, early indications are that O'Keeffe's close control, crossing and fitness levels could equate to an upgrade on what went before.

A word on the visitors, who emerged from the encounter with the point they came for. There wasn't much to admire from an attacking standpoint; James Vaughan a nuisance but largely isolated, losing more aerial duels (14) than he won (12). Otis Khan was familiarly quiet on his return to Field Mill, operating in a central role behind the striker. He was neat and tidy but suffered from a lack of support, with the majority of his teammates unable to spring from their low block. Tranmere's lack of adventure and safety first approach is highlighted by their inability, or unwillingness, to complete a single dribble in the game. Nevertheless, they defended resolutely, ranking joint 1st in League Two for shots blocked (9) and joint 2nd for crosses blocked (4). successfully protecting keeper Scott Davies from having to make too many meaningful saves. They did also try to play out from the back, but were often forced to go long by the high pressing exploits of Cook, Bowery and Charsley.

Mansfield roll on to their first away fixture of the campaign at Leyton Orient next week with a clean sheet. Graham Coughlan will be very pleased that the team he has assembled managed not to concede, having only managed to do so in 2 of 15 league games since his arrival.

See you all next week. Up The Stags!